Probably one of the more popular things I’ve done on this blog was set the goal of having saved $100,000 in retirement accounts by the time I hit 30. I ended up falling just short of that goal, but overall it was a great exercise.

Since then I have really been in cruise control (probably not a great thing) and I thought I had been doing a horrible job saving for retirement as I was saving fairly aggressively for a new house – in fact that was the reason I fell short of my original goal to save $100k by age 30.

Last January I had mentioned that I had enough money in our house savings that I could pay off our mortgage entirely. A year later and my house savings has grown by over an additional $50,000. It honestly makes me sick knowing that I have that much money sitting there doing nothing for me, but given what we think we want in regards to a large chunk of land out in the country I thought it was necessary.

So here I sit I have over $175k in cash waiting to get lit on fire for a house/land purchase and I feel like the biggest bozo in the world knowing that this money could be used and should have been used to get me very much on my way to becoming financially independent and I was doing the bare minimum when it came to my retirement savings.

I decided to do the math since I completed my original $100,000 by age 30 goal less than 4.5 years ago and it turns out since then I have saved $101,691.90 or about $22,500 per year. While it’s not that impressive by itself is pretty good when combined with the amount of money we also were simultaneously saving for the new house and land.

I do not micro-manage my finances as I don’t feel the effort is worth it. I know my wife and I share a similar mindset so it doesn’t take any kind of special effort or sacrificing on our part to control our spending where as a result of our relatively modest income and supporting our 4 children we are still able to save a decent chunk of change.

So what’s next – well the reason I actually went through this exercise was to kick myself in the butt about being such a slacker when it came to saving for retirement. I also have been doing some considerable thinking with regards to what I am trying to accomplish financially here.

I set some great short term goals for myself, but the last few years I have been flying aimlessly in the wind when it came to what I was trying to accomplish next. I have some ideas as to what I want to accomplish and think I have started to piece together some visions I had for myself going all the way back to college, but wasn’t sure how I would accomplish them. I think I now know how I can do this and this excites me.

So look forward to some posts in the near future and a renewed sense of excitement as I set some new goals for myself here.

I figured this is something I should be doing now that I have enough history to take a look at my investment performance over the long term versus the market. Since I have made the decision to invest solely in stocks in my IRAs I need to take a look to see if that decision is paying off or worth the trouble. I do track this with each monthly report as well as each yearly recap – but I have never taken the time to look at my investment performance since the beginning of time.

Now granted this year is very much in my favor so don’t anoint me as the next Peter Lynch just yet, but I have to say I was very pleasantly surprised to see how well I am doing when you stack it all together.

Now since the vast amount of my 401k is an Vanguard Index Lifestyle fund that is closely tracking the SP 500 you will wonder how I outperformed the market so well. Well about half of my retirement nestegg is in my and my wife’s Roth IRAs which are invested 100% in individual stocks trying to beat the market. Over the same 8 year period of time my individual stocks have returned 160.55% total investment return or just under 12.72% annualized returns or over quadruple the returns of the SP 500. 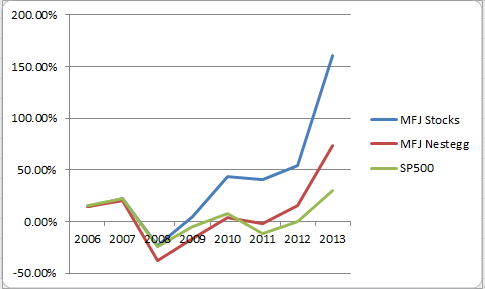 Yowzers – you can certainly see why my investment performance crushed the market this year. First off we have Netflix which is my most successful investment ever having originally bought in at $19.72 for a 1766% return 18 bagger for me. It’s been a volatile stock if you look at it in short term bursts and just two years ago it had fallen from $300 a share to $55, but if you look at the long term chart it’s been pretty rewarding for those investors that ignored the short-term noise. It also goes to show you that just because a stock is up 50%,100%,1000%+ from when you purchased it, it still may be the best spot for new money.

Next up Tesla Motors – I have only owned this stock since the end of January and I have bought it a number of times throughout the year. My first purchase is up 300% in less than 1 year of owning it.

3D systems returns to the list for the second straight year – last year it was my 2nd best stock – this year my 3rd. Hopefully it is back again next year and I get to take advantage of the compound interest.

I won’t go into each stock – but it was certainly an amazing year and one I will likely not see again. You’ll notice three of the stocks on the list I had purchased during the year and they still made the list. I feel very good about the stocks on this list, not because they went up so much this year, but because they are all great companies who are changing the world we live in and are very likely to be here 10 years from now. Despite the big run-up in many of these stocks and the crazy heights the overall stock market has reached – many of these stocks will be on my short list for future investment funds.

And now for the losers….ummmm……losers please step forward – there you two are….boooo…boooo!

Only two of my stocks this year lost money. BJ’s is a repeat on the loser list from last year and ISRG is a stock I bought this July for the first time after a large fall in stock price due to concerns over the safety and effectiveness of their machines in certain types of surgeries. My current feelings are that robotic surgery is in its infancy and is likely to disrupt how many medical procedures are done in the future due to the precision and reduced recovery time. ISRG is clearly the market leader and I have missed the boat on the early part of this story even though I was well aware of this stock. I think this will be a temporary setback for the stock and am glad to get in on its future at a reduced price.

Regarding BJ’s again this is a small restaurant stock – very highly concentrated in California and is going through a learning process on how best to expand in the future. This will take some time and I am willing to wait and give them a chance to produce.

Well unlike other years there has been some change in my investment holdings not necessarily what I am invested in, but as I have grown more confident in my stock picking ability (scary thing) I have begun to weed out positions I have felt less confident in or only owned a small position in and have reduce the number of stocks I own from 40 stocks to 30 stocks and have become much more concentrated in the stocks I feel much more confident about.

Now I am still certainly a long-term buy and hold investor and of the 10 stocks I sold I owned just about every one of them 5+ years and well given my investment performance this year I think things are headed in the right direction.

I will admit to one completely boneheaded moron move. In my 401k you will notce I own VTINX which is the Vanguard Retirement Income Fund – which basically owns cash and bonds and safe investments. Going into 2013 I was feeling smart (scary thing) and you know the market has been on a crazy run since 2009, so I knew the top was coming so I moved $20,000 of my 401k money into this basically cash fund as a hedge that I could then move into an all stock index fund when the market inevitably had its pullback. Yeah the market had one of its best years ever returning nearly 30% and I had $20k sitting in cash as a young person investing for a retirement 20+ years down the road. I’ve said it before – you are an idiot if you think you can time the market and there is a 100% chance you will hurt your investment returns. Unfortunately I didn’t listen to myself. In the grand scheme of things it probably only cost me $2-3k, but I am a moron and learned another lesson.

That is absolutely insane as my portfolio which just sits there and takes extremely little work on my behalf is now making more than my salary in my 40 hour a week day job. It also more than the $100,000 goal I had set for myself to save by age 30 in just one year with no contributions on my part! Compound interest is an amazing force!

On top of that my investment performance was outstanding this year and my individual stock portfolio returned over 68% this year besting the SP 500 by almost 39% on top of the fact that the stock market had one its best years ever. 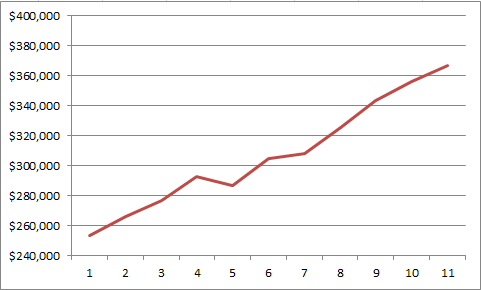