Well certainly an interesting list for 2012 and not a large trend like there are some years. Came pretty close to having IPGP become a 2 bagger for me in a year and my #2 and #4 best stocks this year I only purchased at the end of April. I guess its nice to see some validation from Amazon with a nearly 45% return in 2012 after I made this statement in last years analysis of my individual stocks

“If there was one stock that I felt the absolute best about going forward it would definitely be Amazon which is currently my 7th largest position. I just feel that they do so many things right, have so many long term trends going their way, have a visionary leader, and innovative company spirit, and an absolute focus on making their customers happy. I think they will one day dwarf competitors such as Walmart and Apple.”

And now for the biggest losers

What is interesting about this list is many of they stocks I view as still having great long term prospects and I have really doubled down on a couple of them. This also can explain some of my underperformance this year.

MAKO my biggest loser is actually not a huge holding for me and they are of the more speculative/risky kind of stock so seeing them down 50% doesn’t suprise or necessarily bother me – that being said it is not a stock I plan to invest more money into either.

BJ’s on the other hand I have invested in very heavily as it has continued to drop and its actually my 7th largest stock holding at year end despite the drop. This is a small restaurant stock that has a long growth story in front of it and I am happy to get the discounted price now and have the patience to let it play out.

Ebix is an interesting stock and another one of my largest holdings and has received a lot of scrutiny about their CEO and their financial statements by a bunch of short sellers who have been very successful at driving the stock down, but again long-term I think they are a well run company that is growing by leaps and bounds and throwing off lots of cash so I am not too worried here either and have bought on the the drops.

Activision I have actually trimmed back on – I think it is still a great company and is undervalued, but wanted to use the resources in some of the other stocks that looked very appealing later in the year.

Chiptole I love and think they will continue to expand their concept and just continue to be awesome. I recently added to this position as well.

Qlikview is a more speculative situation. I do own a large chunk of their stock and believe very strongly in their product. Their management hasn’t done a great job executing lately and I think they are prime for a buyout by one of the bigger players, but would have expected more out of them than I have seen in 2012.

Well not a whole lot of change since last year. I did do some reshuffling in my 401k moving most of my funds to a Vanguard target retirement fund. As far as my stocks I haven’t really made any major changes from last year. It was kind of a weak year for restaurants and I’m pretty heavy in that area so that explains some of my short-term under-performance. New guys to the list are a couple 3D printing companies DDD and SSYS. Other than that its the same old same old.

Well always fun to end the year with all-time new high for my retirement nestegg. 2012 was a big year for my retirement account. I broke 200,000 for the first time, I started contributing to my Roth IRAs again (after taking a hiatus saving for a house), and I had my 4th child. My investment performance wasn’t exactly where I’d like it to be, but I know investing lots of my money into individual stocks I will get some wild swings during shorter periods of time (1 year) and overall my confidence is growing with my ability to pick individual stocks over the long term.

I was also kind of amazed that I had contributed over $25,000 to my retirement accounts this year – I didn’t even remember/notice anything special in this regard. Part of it is my employer’s very generous 401k matching program and the other is saving is so automatic for our household that you can save $25,000+ and not even realize it – which just a few years ago when I started this blog would have blown my mind. 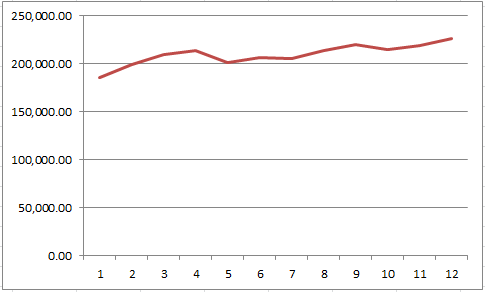