I’m cheap or well frugal and I’m sort of proud of it. It’s not so much that I mind spending money, but if I know I can use my own ingenuity to find the same item for less I’m all for it. Besides not spending money on crap I don’t need, I often find ways to get the items I do need for less. I actually find it kind of fun and this is just one example of where I’ve used a little thought and effort on my part to save myself a few bucks.

My wife and I had our first kid this last summer, and with a new kid comes all kinds of expenses you never had before. One of those expenses is pictures. Not only is it your responsibility as a parent to have a freeze frame snap shot of every moment of your newborn babies life from birth to kindergarten, you are also obligated to send these pictures to all your friends and family members at every milestone in your child’s life (baby’s birth announcement, baby’s baptism, baby’s first Christmas, baby’s first Easter, etc.) Well we already purchase dang near everything at Wal-Mart so it was only natural that we decided to get our photos done there too. Wal-Mart’s photo prices are very competitively priced and when I was placing the order online I was going to do the frugal thing and order wallets to save money, instead of spending the extra money sending everyone a normal 4×6 photograph.

Here’s where it gets interesting. Wal-Mart will develop a 4×6 for you @12 cents a picture and will develop Wallets for you at a price of 54 cents for 2 wallets!! That’s right even though it is rather significantly less photo paper and thus less cost for them to print you two wallets vs. the 1 4×6 they charge you an extra 42 cents for it. In other words the per picture cost of a wallet is 27 cents versus the 12 cents for the 4 x 6 which is about 2.5 times bigger than the wallet. This made absolutely no sense to me and after I explained the situation to my wife she agreed that we should just order 4×6 prints if they were going to be cheaper.

Already feeling proud that I wasn’t suckered into Wal-Marts scheme to rip me off on their wallets, I decided that I could do one even better. I quickly copied the photograph I was getting developed into Microsoft Paint. 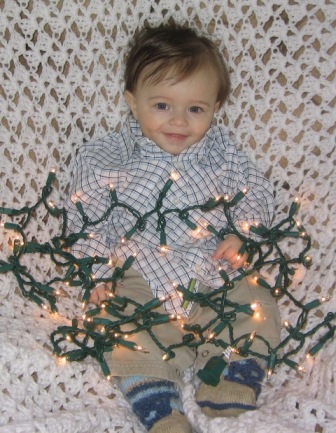 I then made another copy of the picture and pasted it right next to the other picture. I left a little white space in between the two pictures and presto instant wallets. I could now order a 4×6 print of this picture and it would be essentially the same product as Wal-Mart’s wallets (actually mine are quite a bit bigger @ 2×3) and the best part is it costs me 6 cents per picture versus Wal-Mart’s 27 cents. It would cost me over 4 times as much to get a smaller sized wallet picture. And this what I went ahead and did and the pictures turned out great.

I was actually surprised at how much bigger these pictures were than Wal-Mart’s wallets that I am pretty sure I could have gotten away with putting 3 images on the 4×6, but we’ll have to save my 3 cent pictures for the next holiday coming up (baby’s first St. Pattys day?? 🙂 )

BTW – A great site for frugal tips is Frugal For Life