Well 2008 sure was an exciting year and I certainly learned a lot in the process. As for my retirement nestegg I actually lost just over 5% for the year. That is not the whole story though because I also contributed about $15-$20k this year that is not currently showing up on paper.

I guess if I had just checked my balance at Jan 1, 2008 and and Jan 1,2009 it probably would have been a pretty boring year and to be honest this is probably what most people should do so they don’t’ get caught up in all of the nonesense and excitement that is the stock market that the mainstream media portrays to the average investor.

Me on the other hand the only real reason I check is to keep this blog updated and well I’ve got a pretty strong stomach and actually found some of the massive drops to be quite entertaining this year. I also think this year of being fully invested will make me a much better investor going forward. It will certainly be a while before I start sweating a 3% drop in one day. Heck if its not double digits I’m not sure why the media wastes their time reporting it 🙂

I’ve also learned to keep my cool, not act irrationally, and believe the mantra that “if its too good to be true” it always is. Ever since I started this blog I’ve harped on and on about how I wanted a major recession when I was young and would actually prefer to lose money on my investments and see my nestegg shrink than grow. I’ve got time on my side and I don’t need any of this money right now. I need it in 2038 so if the stock market wants to tank from 2004-2024 I am ok with that as long as I have a job. I’d much rather be an investor now than in the 1990s when stocks did nothing but go up.

Anyway here is my December report and a graph of my nestegg growth or lack thereof for the exciting year that was 2008. 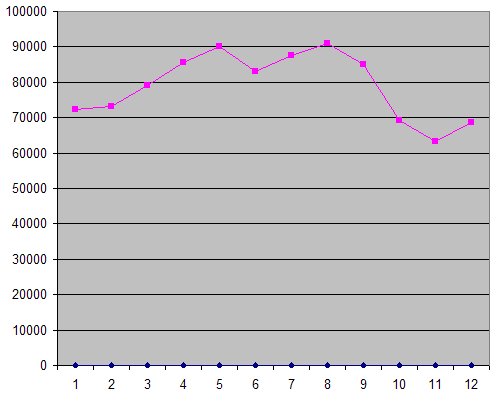