As I mentioned in Part I in the comments, I am invested 100% in stocks. My rational for this, which could be flawed, is that stocks have historically without a question been the best long term investment vehicle for your money. Yes there area a lot of up and downs, but over periods of 10-20 years this volitility is less of an issue, so in my mind the risk is mitigated. Like I said I’m young and don’t know everything, but until someone proves me wrong this is the strategy I’m sticking with. In my mind I would be throwing money away by investing in bonds, real estate, gold, etc. 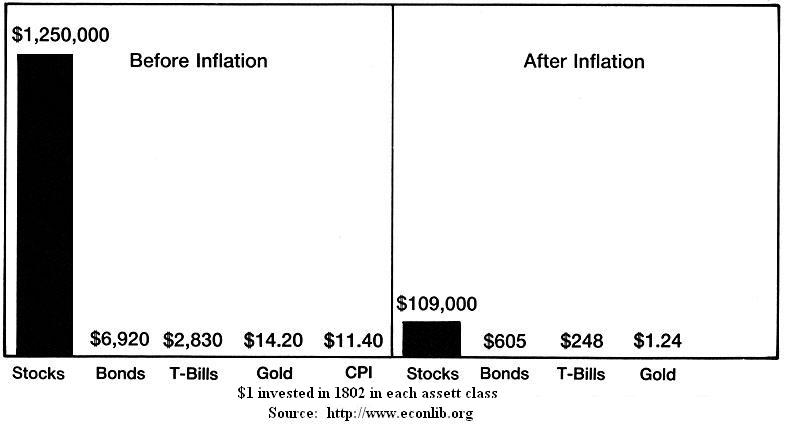 So to the stock market returns. Probably the most common percentage given in the personal finance world is 10%, partly because on average the stock market has averaged roughly 10% for the last century. Actually depending upon who you talk to and which time frame was used, survivorship basis, etc. that return can be quoted anywhere from 8-12%, but 10% is pretty much the norm.

So even if you accept that 10% is the historical average return of the stock market and history does in fact repeat itself, there are a number of other factors that could alter this return.

Despite historically returning 10% over say the last 100 years, there are many smaller periods of time 10,20, maybe even 30 years where this return has been a couple percentage points to either side. Despite the outstanding returns of the late 1990s (I believe the market avergaged somewhere around 25 percent for 3 or 4 years in there), I believe the average for the last twenty years has only been 8.7%.

Then the major thing that gets most people, is that even though the stock market may have averaged 10% most individual investors don’t come anywhere near that number. Part of it is due to picking sub-par investments, some of it due to limited resources, and probably the most signifigant factor is costs incurred while investing. Even if you are able to pick an investment that performs average or above average many people rack up tons of fees in trading costs, account maintenance costs, or mutual fund expense ratio costs that quickly trim their return back down to below average.

I think that the most common investment vehicle for people today is the mutual fund. Again depending upon who you talk to or what set of data was used, anywhere from 70-90% of the mutual funds out there can’t beat the markets average return. Again there are many factors for this, but one of the major factors again are the fees that are charged to the owners of the mutual funds every year.

Individual investor performance along with the track records of most mutual funds have prompted many in the investment community to highly tout that you invest most of your money in index funds, which have very low fees and that will guarentee you just slightly less than the markets average rate of return (the small expense ratio is the slightly less part). Most index funds have expense ratios that are .30% or less.

So if I were to invest soley in index funds it probably would be safe to say that a compound annual rate of 10% may not be uncalled for. However despite being a firm believer in the power of index funds, I do not invest in index funds. More on this in Part III.

Part I – Introduction
Part III – Trying to beat the odds