A couple months ago I talked about my pimp ride. Well I’m sure some people might call me a hypocrite, but I actually went ahead and replaced that car last weekend. Now before you go ahead and start saying “I told you so” you can’t buy crappy cars like that and expect them to be a reliable vehicle that you need to drive every day, I’ve got a couple things to point out.

The only reason I decided to replace it was that a few months ago my car started releasing a gas/exhaust smell from the engine. The car’s exhaust is completely fine as it was replaced shortly before I bought the car, but I decided that I did not want to take it in to get looked at or repaired and that I would start to look for a new car. My dad said I got a leaky gasket (I know nothing about cars) and I don’t know how much that costs to fix, but I figured since I got a new job I could splurge and get myself a new car.

The new hot rod
So I’ve been keeping an eye on the classified ads for a replacement car. I like to buy directly from individual people, because then I don’t have to pay the huge dealer markup. Buying anything from a dealer, pretty much means you are throwing money away. So last weekend I happened across a vehicle that interested me and gave the owner a call. The owner I believe was from India or some other middle eastern country so I couldn’t really understand much over the phone, but he mentioned that it had a new radiator, new exhaust, ran great, and had a little rust under the door (perfect!!). So despite it being pretty late on a Friday night I wanted to go check the vehicle out because used Toyota’s tend to go fast.

By the time I got to the car it was relatively dark out. The car is a 1992 Toyota Corolla 4 door manual transmission with 196,000 miles. I could see visible rust on the underside of the driver side door. I actually get really excited when I see rust, dents, scrapes on a car because that is going to lower the resale value considerably. Seeing as how the only thing I care about is mechanical stability rust is a welcome site. Sort of like when you are looking for a fixer-upper house to flip you should be looking for pet urine stains on the carpet, horrible paint jobs, and other stuff the lowers the value much more than it costs to fix.

Not only did this car have some rust, it has some other pretty unique properties that helped lower the asking price for me. One – the driver and passenger side door handles were broken off completely on the inside. The owner said that in the cold frozen winters of Wisconsin the plastic had froze and he ended up snapping them off. Ok no big deal I thought the General Lee was cool and it didn’t have door handles, besides you can simply roll down the window and let yourself out right? Wrong the driver’s side and passenger side windows were also defective and would not go down more than 1/2 inch and then trying to get them back up in the track was nearly impossible. So to get out of this vehicle you actually had to reach into the back seat and roll down the back seat window, reach your arm out the window and open the driver’s door from the outside. Ok maybe not the safest or most convenient thing in the world.

The other things that made testing the car out unique was that it had no plates and the owner wouldn’t let me drive it on the road, so I could only drive it within the apartment complex parking lot. It’s a manual transmission (which I love) and the clutch (at least the first 2 gears) seemed in tip-top shape and the car drove very smooth. I just tested out some basic things in the car (blinkers, hazards, break lights, head lights, high beams, steering, breaking, alignment). The interior of the car was spotless and all of the accessories worked superbly (radio, heater, AC, speedometer, etc). While driving the car with the individual he received two other calls to look at the car that night (probably his buddies 😉 ) so I decided to go ahead and give him is asking price for the car right there. I’m a horribly negotiator and have paid the asking price on all of my cars and taken the first offer on all of my jobs. Needless to say I thought I saw a good bargain and my guess is I’ll get my money out of the car even with poor negotiating skills.

Kelly Blue Book on the car has the car listed at $1350 in fair condition (yeah I know it might be below fair, but all the things wrong with it have no affect on my value of the car). The guy was asking $750/obo and I paid $750 for it. It was 9pm on a Friday night and the owner was smart and wouldn’t take a check. So I had to go to the ATM machine to see how much money I could get out of the ATM machine. I’ve actually never used an ATM machine before so I had no idea if I could get that much money out. Turns out I could only get $500 per day out. However $500 cash, a check for $250, and an ATM receipt showing the $500 withdrawal and over $5000 still left in the checking account was good enough to seal the deal.

So here she is. The next morning I realized there was a little more rust than I had originally thought and that the back tires were bald, but no sweat off my back. I actually lucked out and it had the exact same tires as my Ford Escort and my Ford Escort tires had lots of tread on them. So I simply swapped tires. Then I decided to take the door handles from the back a seat and put them in the front. This was a piece of cake and worked great. I never have anyone in my back seat and even then what could be better child safety locks ;-). While taking the panel off the door to fix the inside handles I noticed that the bolts that align the window were loose. I simple moved them back to where the “worn” spot was on the inside of the door and tightened them up and the windows work great now too. So in an hour or two of work I fixed just about every detail that was wrong with the car (minus the rust and back seat handles) and it cost me no $$$. In fact had the guy simple spent the half hour to fix the door and windows I’m sure he could have easily gotten over $1000 for the car. I may attack some of the rust spots next weekend, but for now I am thrilled. 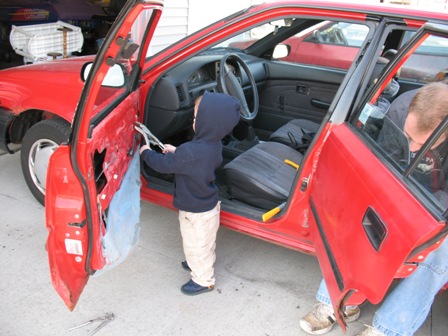 Most people want to drive a car that portrays their image and I think this car fit’s me a to a tee. It may not be the most flamboyant car in the world, but I think it was a great value, meets my needs perfectly, and slowly but surely contributes to my net worth instead of decreasing my true net worth like most people’s cars do. I dunno if it’s just because Toyota’s are so much higher quality than most of the domestic cars I have ever driven, but this car drives like silk and I’m very excited I made the swap. As for my old car, I don’t know if I want to go through the trouble trying to sell it to another person who values cars the same way I do, so I am probably going to take it to the local salvage yard and try to get a couple hundred $$$ for it. This will lower the total cost of ownership for the car and make my decision to buy sub $1000 cars even better.

Anyway seeing as how my first post on my car was so popular I figured it was my duty to keep you informed with my car change decision. I will run the numbers on my old car for total cost including oil changes, repairs, etc. and will keep a running total with my Toyota. What I think you will see is that from a purely financial standpoint you will not even come close to the value you get from buying cars like this.

Anyway glad to be back in the blogging flow of things, my phone lines magically started working yesterday and buying a new DSL modem fixed all my problems, so you can expect to start getting at least daily posts from me during the week again.