Well if there was one thing and one thing only that I could recommend to people really looking for ways to save money to get out of debt or save some extra money for retirement it would be don’t ever buy a new car. In fact I would go one step further and say spend as little money as possible on your cars.

I’ve owned three cars in my lifetime. My first car a 1994 Ford Escort was given to me by my parents after high school and I drove that car for almost 5 years before I totalled it by running into a deer. At the time of the accident the car had nearly 190,000 miles and was running great. Granted some accessories were missing (heater, AC, radio, speedometer), but the car never broke down on me and I think my only expenses were maybe 3 or 4 oil changes in the 5 years that I owned it and I put about 95,000 miles on it. Needless to say it got me from point A to point B and I was happy.

My Beamer
My second car, which may be the worst financial decision I have ever made in my life was a 1990 BMW 525i. I was getting married about a week after I totalled my Escort and I needed a car. My buddy’s dad from work was selling his old BMW and despite it having 160,000 miles I did my due dillegance and found out that these cars can just plain run forever, plus it was a pretty cool car. I paid $3000 for the car and drove it for about 5,000 miles before it just shut off one day when trying to get to work. Turns out it was some minor piece that controlled the fuel had corroded and needed to be replaced. $450 later (should have been like $1500 according to mechanic but he just hotwired his own solution instead of following BMWs recommendation to replace all the wiring involved) I was back on the road and running. Well throughout the next few months one of my headlights stopped working, I hit a racoon which broke off some fancy stuff that wasn’t on my escort which in turn shorted out other electrical things like the outside temperature guage, etc. For being a car from 1990 this thing had more electronic gizmos than James Bond’s car. The worst thing is any minor problem resulted in a repair bill that cost me more than I could purchase another car for, so I threw it in storage and bought myself a “new” car. Later sold it for $1900 after spending probably another $400 to make it saleable. Total cost of the car for the year or so I drove it was probably $4500

The return of the Escort
Swearing off buying any fancy cars with too much electrical equipment for the rest of my life I went back to my roots and purchased a 1990 Ford Escort. Had 90,000 miles on it, new tires, new exhaust, and an extra helping of rust. Actually ended up getting it for $900. I’ve been driving this car for 2.5 years now despite my ignorant driving decisions, haven’t had any major problems with it so far (actually I think my muffler has a hole in it now and so I may have to fix it or buy a new one). That’s the great thing about buying sub $1000 cars. You drive them and if they last a couple years you make off like a bandit $400 per year auto expenses for this car. If something major breaks donate the car to charity or sell it for scrap and just go buy another one. Some people may say its riskier to buy old cars like this, but really to me I am diversifying my risk as I have seen plenty of brand new cars broken down on the side of the road and when you still owe $20,000 on the car you are sort of obligated to spend whatever it takes to fix it. Me I’m free and clear to do whatever I want without any major financial ramifications. 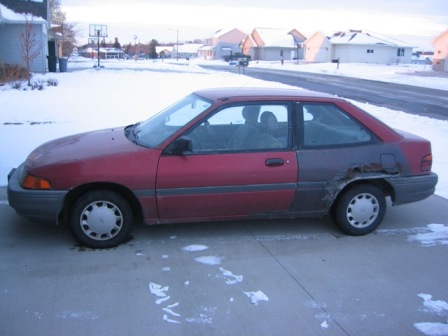 Now those of you looking at the ugly monstrosity in the picture above, yes my car is ungodly ugly and yes I get crap about it all the time. The black on the rear corner panel is actually rustoleum that I sprayed on the car one day to playfully stop the rust. Probably not my brightest decision, but you don’t have to find a car as ugly as mine in order to get it for a bargain basement price, although rust never hurts when you are trying to get the car for a lower price.

Now I know part of my experience has been due to just plain getting lucky with my cars, as I know nothing about cars, and to be honest don’t do any of the routine maintenance that probably should be done on a car. I just plain haven’t had any adverse consequences from not getting oil changes every 3,000 miles and nothing else major has ever broken down on my escorts. I think when you pay this little you can risk “saving money” on not doing maintenance because unless the car just plain blows up in the first year you pretty much get your money back.

Anyway now you know how I roll. To see how my readers roll see the comments here